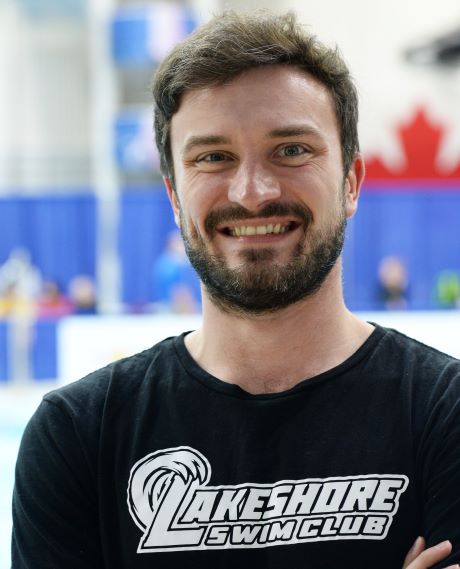 Tristan has been a member of the swimming community for over 20 years. He began his coaching career with the Hamilton Aquatic Club, and worked as an assistant coach with the Etobicoke Swim Club for 7 years, where he was a part of numerous Ontario Provincial Championship winning teams, as well as the Canadian Junior Championship winning team in 2018. He believes in coaching each athlete on an individual level, inspiring them to create ambitious goals, and enabling fulfilment through challenge. He has developed a philosophy of coaching centered on values of effort, attitude, professionalism, and teamwork to achieve high performance results.

Tristan has had many athletes excel at the Provincial and National level. Some of Tristan’s personal coaching accomplishments include:

Tristan is excited to take pre-competitive athletes, foster their development through age group and senior level swimming, and prepare them for university athletics and life beyond the pool deck. He is looking forward to building a culture of excellence, and developing the next wave of great athletes and great people at Lakeshore Swim Club.

Jorge's passion for swiming started at an early age in Peru, where he would learn that swimming would be part of his life.

Upon coming to Canada, Jorge took a position at the Downtown YMCA of Quebec in Montreal, which he held for 7 years, coaching swimmers in the Masters program. Here, he prepared daily training to improve athletes' endurance and swimming skills. He also coached the competitive swim club at Du Parc YMCA, where his group participated in the 2019 Team Festival in Montreal. At the same time, he was working as a swim instructor in the Centre D'Education Physique et des Sports de L'Universite de Montreal, and as a coach of the Masters program in Montreal city pools.

Jorge went on to coach in the age group competitive program at Neptune Natation in Montreal for 2 years, where his experience and skills allowed him to lead successful groups. At Neptune, he took 19 athletes to the Regional Cup, 5 swimmers to Quebec Provincial Championships, and 2 swimmers to the Quebec Games in 2022. He was also responsible for the Masters program.

Jorge is pursuing his passion for swimming as a coach working with children and teens, hoping to pass on his discipline and love for the sport to others through hard work, excellence and fun. Now as Head Age Group Coach at Lakeshore, he is excited to face a new challenge, and inspire swimmers to do their best and achieve their goals.

Audrey is currently in her final year of undergraduate studies in Political Science and History at the University of Toronto. She is hoping to eventually pursue a post-graduate degree in Law. Throughout her time in University, she has been involved in the swimming world through both competing and coaching. During her first year of undergrad, she swam with the Varsity Blues, and then moved on to coaching pre-competitive club swimming as well as assistant coaching the U of T varsity team in her upper years. Some of her assistant coaching involved working alongside a Para swimmer, whom she assisted in his achievements of multiple National records. She has also had a bit of experience coaching masters teams in downtown Toronto.

Before her time as a varsity swimmer and coach, Audrey was a competitive age group swimmer for 10 years with the Toronto Swim Club. She has had the opportunity to race at meets such as Provincials, Age Group Nationals, and Trials. Her biggest accomplishment was finishing top 16 in the 100 Breast at the 2017 World Trials in Victoria BC. She loves the sport of swimming and believes that it is a great way to teach children crucial life skills outside of the pool such as time management, perseverance, and managing relationships. She hopes to bring a positive training environment to LSC, and to help foster the same opportunities she was so lucky to have in her time as a swimmer.

The sport of swimming has been one of Nicole's greatest teachers in life, and has equipped her with skills that continue to positively impact her life today. She grew up following her mother around the pool deck, watching as she coached, and began her competitive swimming journey with MSSAC at age 10.

During her swimming career, Nicole competed at various levels, achieving the Senior National standard during her teen years. A few highlights for her included competing alongside her sister at Olympic Trials, traveling to various cities for competitions, and building lifelong friendships with her teammates. After high school, she continued to swim on the varsity team at the University of Western Ontario.

Over the last 15 years Nicole has had the opportunity to coach various developmental groups, as well as age group swimmers. During her time with MSSAC, she coached the tier 2 age group level athletes to Regional and Provincial time standards. Nicole is passionate about inspiring athletes to achieve their goals, and supporting them as they develop their skills both in and out of the pool. She is committed to providing an inclusive, hard working and fun atmosphere that inspires everyone to be themselves. As a lifelong learner, she is continually pivoting and adopting creative ways to coach and support development.

Nicole is incredibly grateful to have joined the LSC team, and is thrilled to be part of the continued growth of the club.

Maya swam competitively for 15 years with various swim clubs, including Etobicoke Swim Club, Blue Waves, York, and RAMAC. She is currently completing her bachelors degree in Nursing, but is very involved in the swimming world. She has been teaching and coaching swimming for over 7 years, and has taken positions with the Canadian Coast Guard, private swim companies, and the City of Toronto. She also competed and acted as an assisted coach for her school swim teams.

Last year Maya was coaching with Lakeshore in the pre-competitive program. She was able to maintain a fun, yet challenging environment which allowed for young swimmers to focus on skills while working together as a team.

As Maya in constantly involved in the aquatic atmosphere and holds a passion for swimming, she hopes to spread her knowledge and help young swimmers achieve thier goals in a creative and supportive environment. She is very happy to be a part of Lakeshore this season, and is very much looking forward to meeting everyone!

Christine began swimming at age 9 with the Etobicoke Swim Club in the Intro program, and worked her way through their competitive program for the next 10 years. She represented the club at the Junior Provincial and National levels, and with her relay teams, swam to three Provincial medals.

On deck, Christine volunteered as an assistant coach with her elementary and high school swim teams during her swim career, and afterward attended University of Toronto, at which she completed a Bachelor of Science degree and stayed close to the water through lifeguarding.

Christine joined the Lakeshore Swim Club team in 2021 and coached at all three levels of LSC's pre-competitive program, where she focused on building the fundamental skills of swimming and instilling lifelong values like dedication and hard work in the next wave of athletes. She brings her passion for the sport to help young swimmers have positive experiences in the water, establish friendships, and create engagement in each training session. During her time with the Yellow Group last year, 5 swimmers achieved the Central Region Standard.

This will be Christine's second year coaching the Yellow Group, and she is very excited to kick off another season and contribute to the exceptional environment of Lakeshore Swim Club.